That’s a good question.  After all, the Acts of General Synod are not exactly riveting reading.  They won’t win the Giller, Nobel or Booker prize and they definitely won’t be on the New York Times Best-Seller list.  The Acts are not a novel with characters you can relate to or a short story which might grip you.  They aren’t even like a Wikipedia article which explains something of general interest.  What they are is a series of decisions made by the broadest assembly of our church federation (try not to yawn). They are – let’s be honest – a dry read.  Very dry, at times.  So why should an average church-going person like you read them?

Well, sometimes it’s important to force ourselves to read things which may have little natural appeal and this is one of them.  Let me give you my top five reasons why you should put the Acts on your Kindle or your side-table and work through them.  In descending order, they are:

#5: To keep your promise

When your church makes promises, you make promises.  The church is, after all, you plus all the other members together – not just the consistory.  You are part of that local family of God and that family has made a number of promises.  I’m referring to all the agreements each church voluntarily makes to work in harmony with all the other churches in the federation.

These agreements are spelled out in the Church Order. In Article [Art. 45 in Aust. CO] we promise to honour “the decisions of the major assemblies”.  That means we are committed to abiding by them (unless they need to be appealed – see # 3 below).  Our promise implies that we have to make ourselves aware of those decisions and put them into practice.

#4: To engage yourself in church life

When you made public profession of faith, you promised to be a “living members of the church”.  A living member has to know what’s going on in church, what is being discussed, what is under consideration, what may be in the process of changing.

#3: To prevent error or abuse

General Synods, like all meetings of human beings, can and do make mistakes.  Though great care is taken and usually much caution is exercised, sometimes synods get decisions plain wrong – either against the Bible or against the agreements pledged in the Church Order.  If church members don’t read the Acts, these errors may go undetected and, worse, uncorrected!  Article 31 of the Church Order points out our obligation in this respect, for there we promise that “whatever may be agreed upon by a majority vote shall be considered settled and binding, unless it is proved to be in conflict with the Word of God or with the Church Order”.

Once a general synod (or, for that matter, a consistory, classis or regional synod) has completed its agenda and published its decisions (Acts), it is up to the members to review, study and test those decisions according to the criteria of Article 31.  If concerns are raised in your mind, invite your elders over to discuss them.  If it becomes clear that those concerns are indeed valid and weighty enough, then formally approach your consistory with a letter providing a clear argument as to how one (or both) of the grounds in Article 31 was violated by a particular decision and urging consistory to launch an appeal.

Although only a consistory may make a formal appeal against a synod decision (unless such a decision involves someone’s personal situation), members may and should give input and direction to the consistory about such things.  We all need to be watchmen on the wall of Jerusalem – not that we go looking for trouble but rather that we humbly seek to prevent it.  Elders will be well served by a respectful, clearly written letter which reasons out for them why it is necessary to make an appeal.

[In the FRCA, following a decision of Synod 2018, and contrary to earlier synod decisions, a church member who is convinced that a synod decision was unscriptural or against the CO can now no longer appeal directly to the following synod. He must now ask his consistory to appeal. If his consistory refuses to appeal the decision, that church member must now appeal (his consistory’s refusal to appeal) to the classis and then, if the classis also refuses, the member can appeal to the following synod. More on this in a later article. JN]

Our general synods are made of Reformed men – ministers and elders – who spend much time thinking through the issues on the agenda.  Many of these men have been formally trained in Reformed theology and many have trained themselves in it through their personal reading and study.  Collectively, they have a great deal of experience in these matters.  Further, the churches which offer submissions to the synod on committee reports (and many, thankfully, do write such letters) also take their time deliberating in consistory/council in order to arrive at biblical, Reformed responses.  Every church assembly prays for God to provide wisdom and guidance by his Spirit.  The end result is that the decisions of the general synod often distil and present the best of Reformed thinking on the topics at hand – and we can learn from that reflection.

#1: Because you love the bride of Christ

If you love Jesus Christ then you must love his bride too, which is the church.  A true Christian cares about what is happening in and to the bride of Christ.  Reading through the Acts keeps us abreast of developments within the church where we hold membership.  It makes us aware of concerns as well as beautiful developments, both of which we may bring to the Lord in prayer.

So, there you have it – five good reasons to down-load or pick up the Acts and read!  For the sake of the preservation and building-up of Christ’s church, I urge every communicant member to become informed and get involved!

(Rev Peter H Holtvluwer is minister of the Spring Creek Canadian Reformed Church at Tintern, Ontario. This article was published in Clarion Nov 1, 2013. It has been condensed by deleting references to the Canadian situation and is published with kind permission of Rev Holtvluwer.) 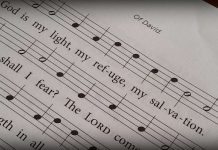 Character, Aim and Purpose of the School