Vreugdenhil was born in Vijfhuizen, a village in the province of North Holland. His father studied theology at a later age and became a minister in the Christian Reformed Churches. (Those churches who did not join in the Union of 1892.)

After serving there as minister for three years, he joined the Gereformeerde Gemeenten (A conservative bond of churches in the Netherlands.) 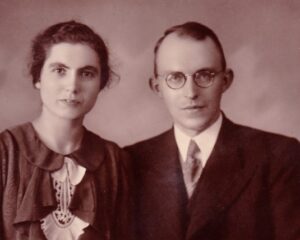 Johannes decided to become a teacher, serving at two different schools before becoming principal at the Groen van Prinsterer School at Kampen. He retired from this task in 1977.

His youngest daughter wrote: ‘Dad demanded too much from himself and wanted to do too much too well.’ He saw the writing of these stories as a calling to which the LORD had called him. His focus was to make sure the message was conveyed properly. He was a perfectionist with much attention to detail.

He knew himself very dependent on the LORD, also in the little things of life. He was critical of a superficial faith, a faith with little content. He was equally critical of strict legalistic preaching. His main concern was for his children to love and serve the LORD. 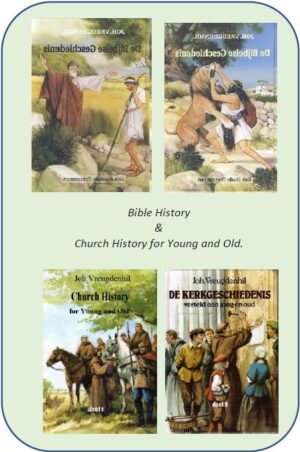 Wherever he was, there was a lively discussion happening.

He was married and received eight children. Although keeping strict discipline in his family, he also knew how to play with his children and invented all sorts of games for them. He loved his wife dearly and helped her where he could with the household chores. For eight years he served in the special office, first as deacon then as elder.

One of his mantras was ‘God makes His word true; He does what He promises’. He often stressed this to his children and his students. At 68 he developed a tumour for the second time. This became a difficult stage in his life. He would never complain, he accepted that whatever the LORD did was good. Slowly but surely his body wasted away. Once he confided to his daughter: ‘Now I can’t even kneel anymore’ He had great difficulty accepting that.

Below is part of his work that have been recently translated from Dutch into English. The structure below is laid out in chapters. Clicking the link will automatically download the chapter in PDF format.

Please note that this is an ongoing translation project, so not all chapters will be ready for download. However it is our intention to continue translating and making subsequent chapters available for download as they become complete.

Note(s):
1. These chapters (111 A,B,C,D) are written by H. Ballast as J.Vreugdenhil does not cover this part of church history