This meditation about Easter is by the late Rev Herman Knoop, a reformed minister who survived Dachau (see A Theatre in Dachau) and who was an instrument in God’s hand in the Church Liberation of 1944. JN

The Word of the risen Christ’s victory faithfully preached

Why not? Well, for the simple reason that those who were connected to the resurrection of the Lord, namely His disciples, were already well-informed that He would rise from the dead. They’d been told!

Christ Himself clearly told His disciples on several occasions what was to happen to Him. The last time was just prior to His crucifixion; so this should have, as it were, re-sounded in their ears on Easter morning and reminded them of all He had told them concerning His suffering, death and resurrection. Yes, that crucifixion should have alerted and awakened them to what He had said about rising from the dead.

The last time Christ was with His disciples, He had said: you know that after two days is the Passover, and the Son of man will be delivered up to be crucified (Matt. 26:2). And in three earlier proclamations (Matt. 16: 21; 17: 22, 23; 17: 19) He had given a broader view of what was in store for Him, giving more detail. Besides telling them that He would be ‘delivered up to be crucified’, He had also told them about His death and being raised again on the 3rd day. 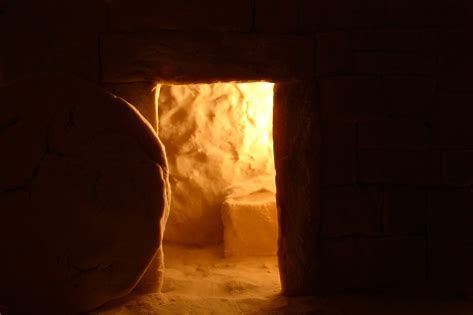 Yes, they had been told, and that knowledge should have faithfully determined all their actions.

However, the disciples of the Lord had not believed His Word, including the Word of His resurrection. They had not kept His Word. Actually, they had taken His Word, noted it for information, and then forgotten about it; they forgot it so completely that at His crucifixion and death His words did not even resonate with them. When all this happened, they were not able to see beyond the grave but got stuck there, as it were. This made their guilt of unbelief complete. He became for them: Jesus, the crucified One, who died and was buried.

That was the only way they thought of Him; and because they had forgotten His words that spoke of being raised from the midst of death, they did not see His cross as the way to the throne and a crown; His death had provided for them no prospect to everlasting life; His grave had given them no perspective prospect to the wonderful events that would follow.

And hence the only logical thing they could do for Him is what people do for one who has died: pay their last respects to Him.

In order to do that, the women went on the first day of the week, early in the morning, to the grave in the garden of Arimathea, carrying their spices; there was that tender loving care coming to the fore after such deep and sorrowful love. Then, as far as they could see, that would be the end of everything. So, instead of hastening with happy, joyful hearts to the grave in order to see the fulfillment of the promise which had been proclaimed to them, and instead of singing “for I know that God is at my side; in Him whose word I praise, I do confide; He heard my voice when in my fears I cried: the Lord is my defender”, they bring sorrow and mourning into the church. For this is what becomes the monotonous refrain on Easter morning: they have not kept the words of His resurrection. They have been foolish and slow of heart in that they have not believed everything Christ had told them. That is also why they are so miserable and wretched. For blessed is he who hears the Word and also keeps it!

Blessed is he who keeps His Word

It is to God’s praise that an angel intervenes, an angel who functions as church-messenger in this moving critical situation of His dearly-bought church. No, it is not Christ who appears to convince them of His resurrection, because first of all the words ‘raised from the dead’ have to be believed by them. Their belief has to be based on what they have heard, not seen. That is the normal way to believe. The living Lord does not leave His church which, following their own devices, foolishly chose the orphanage instead of His Father’s house and the cemetery above the festive church-hall.

This is why He brings the preached Word – so that the Word will triumph and He will bring His self-willed orphans to the faith.

He does this through the service of an angel. Actually, the preaching of the Word is the work of man, but right now there is still no man as yet available. All of them have deviated in unbelief. And now an angel has to temporarily take the place and come to the aid of man. The preached Word that He is bringing must be received as God’s Word of grace. Hence the introduction: do not be afraid …

But that word of grace is accompanied with a reproach: for I know that you seek Jesus who was crucified. The reproach is that they seek Jesus on the basis of the one assurance which they still possess: the poor and miserable assurance that the cross, the death and the grave were the end. The angel said: He is not here … but you are seeking Him here at this place of the dead. How is it even possible that you dare to seek Him at the place of the dead, for He has risen, just as He has said.

That is how the messenger to the church refers to the risen Christ: in the preached Word; for if Christ had risen hundred times and had not been preached, it would have all been in vain.

Have you noticed that what was proclaimed to Christ’s church at the empty grave in the garden of Joseph Arimathea was not a new kind of preaching? Actually, it was the old preaching; the same message of which Christ Himself had spoken to His disciples. The words of ‘the raising up from the dead’ which Christ had earlier proclaimed to them, are now once again taken up by this church-servant. To that same Word the women are thrown back as it were by this church-servant from heaven when he proclaimed: just as He has said. For there is no other way to come to faith, including the faith in the risen Lord and His resurrection, than by the hearing of the Word, the hearing of the Word that the Lord has proclaimed to them.

And see: through that proclamation of the Word of the risen Christ, the old Word that once again re-sounded at the empty grave, they were won over to the faith of their risen Lord and Saviour. They now indeed quickly let go of the grave; it has no more power over them, and in their faith they hasten to go to the disciples. No, it’s not because they want God to hurry, but they themselves hurry to fulfill their Easter message and tell the disciples of the words that had been proclaimed to them: ‘Christ has risen from the dead’. The Lord has truly risen!

And see, it is when they leave in faith, that Jesus, the living Lord, meets them. Now that it appeared that the Word of the raising of the dead had won them over to the faith, the Lord can appear and confirm His Word.

Will you remember that, also today, this is the way the living Lord preaches the Word of His resurrection? He goes the ancient and historical way of proclaiming the true faith. That’s where you must find it: in the preaching of the Word. The preached Word must also win you over to a true faith in Him, who was dead but He lives. For also today it has the same conquering power; and whoever goes in that way cannot remain silent, he cannot keep his mouth shut. He must speak. And when he speaks, he speaks of Him in whom he believes: the risen Lord:

I say to all: He lives,
He’s risen from the dead,
He will dwell in our midst.
And by Him we’ll be led.