Christ’s high priestly prayer in John 17 is often used to promote unity with different church federations. Specifically, verse 21 of this chapter: ”…that they all may be one, as You, Father are in Me and I in you” is used to justify this. Many see this prayer as a command. This prayer becomes the impetus, the driving force to set up committees, appoint deputies, and organise conferences and international gatherings to promote unity and acceptance among different church bodies. Organisations such as the World Council of Churches, the Reformed Ecumenical Synod, the ICC (International Churches of Christ) and the ICRC (International Conference of Reformed Churches) all take their starting point in this prayer of Christ: ”…that they may be one as we are”.

In his book Het kerkschip biedt behouden vaart (The church-ship provides a safe journey), Prof H.J. Schilder deals with this prayer. He argues that the widespread use of this prayer to support church unity movements is inappropriate and a serious misreading of this high-priestly prayer.

First, we are to keep in mind that it is a prayer!

Through the apostle John, we have the privilege of ‘listening in’ to this prayer. However, this privilege does not give anyone the mandate to change this into a command!

A prayer is just that: a prayer.

To change this prayer into a command makes the outcome of this prayer dependent on our response!

In other words, we imply that if we do not obey this perceived command, the prayer itself is not heard! It is then spoken by Christ, heard by the Father, but has not become my experience.

Not so. Christ allows us to read His prayer so we would fully understand and to impress upon us that He, Christ, wrestled to obtain this unity from the Father. Therefore, unity is 100% His doing and not at all due to our ecumenical striving and activities.

This prayer is not heard when we engage in conferences, speeches, writings, or whatever promotional tool we choose to work unity among different churches. No, God hears this prayer when Christ, by His Word and Spirit, makes people obedient to His commandments, including His command to join the true church! God hears this prayer when people live in true covenant fellowship and communion with Him. Yes, Christ is our complete Saviour; this includes providing unity among those whom the Father has given Him. The unity exists when there is true faith, regardless of any ecumenical organisational framework. This prayer of Christ is always heard and continues to be heard all the time. It was heard already at Pentecost and ever since, whenever people believed the apostolic Word. This prayer is all-powerful; it changes people’s hearts and makes them heartily willing to live, not only according to some but to all God’s commandments.

Yet, this prayer is often interpreted as a command to search for and ‘negotiate’ unity, e.g., by dropping the standards. Particularly the words of John 17:20-21 are often quoted in this context. Let’s have a closer look at what Christ really prayed for.

There we read: “I do not pray for these alone but also for those who will believe in Me through their Word, that they all may be one as You Father are in Me”.  The word ‘that’ in the phrase ” ..that they may be one” is usually interpreted as a purpose, an objective. In other words, the sentence could read: Holy Father, keep through Your name those whom you have given me so that the outcome will be that they seek to be united as We are.  Reading it this way, the phrases “keep through your name” and “that they may be one” become two stages in a process. Two stages which can be identified separately: first, there is that divine aspect: “keep through Your name” then follows the human element ‘seek to be united’.  Indeed, this translation from the original Greek is possible, and it is this interpretation that motivates many ecclesiastical unity movements. They see in this prayer a clear mandate to do their part of the process.

Yet this is not what is meant here. Verse 20 is a parallel text to verse 11: “Keep through your name those whom You have given Me that they may be one as We are”.  From this text, it is evident that Divine preservation includes unity, is part and parcel of it. In other words, preservation is unity. Focus on preservation, and you achieve unity. Unity is the inseparable consequence of preservation. It means that in seeking ecclesiastical fellowship, the focus should be on preservation rather than unity.  Turn these two around, and you court disaster. Initially, the results may look beautiful and release warm, fuzzy feelings; but the final product is shaky, lacking fertile soil for growth and fruitfulness. However, with the emphasis on preservation, we focus on the Truth: God’s Word and the confessions based on that Word. Embracing the fullness of His Word enables the Spirit to release the powers of peace and unity and fellowship and joy and praise.

“Lift up your eyes, look around and see; All these gather together and come to you. As I live,” says the LORD, “You shall surely clothe yourselves with them all as an ornament and bind them on you as a bride does” (Is 49: 18).

Unity and ecclesiastical fellowship are a matter of:
receiving, not a result of an action.
It is a promise rather than a demand.
It is a gift, rather than a calling.

Our activities do not bring about unity; on the contrary, from beginning to end, unity is a gift from God in His preservation of those given to Christ and for whom Christ prayed in this high priestly prayer. All we need to do is exercise, employ and enjoy this gift. We do not even need to give ‘visibility’ to what He has provided ‘invisibly’. For Christ even prayed for the ‘visible’ unity as His gift to His Own.

Therefore, we should never feel compelled to organise a conference or appoint deputies to promote and realise this unity. On the contrary, our mandate is to confess Father’s Name, live accordingly, and ‘use’ the gifts that Christ has given us. In this way, we know ourselves kept in this unity because of this prayer of our Saviour.

Now I can really celebrate the Lord’s Supper and echo the words of the Lord’s Supper form where it states, “..so we all, incorporated in Christ by faith, are together one body. For the sake of Christ, Who so exceedingly loved us first; we shall now love one another and shall show this to one another not just in words but also in deeds”.

Christ’s prayer was and will always be heard in the church that keeps His Word faithfully and lives accordingly.  Therefore, every reformation is not a break in this unity as is so often said. Reformation is the restoration of this unity: visibly, audibly and verifiably. Each one is duty-bound to join this church and so maintain and preserve this unity (Art 28 BC).

DGK and GKN move towards unity 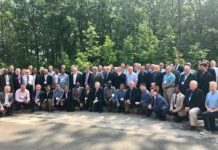