Three times a voice sounded from heaven to show that Jesus was the Son of God. First, at the beginning of His earthly ministry, when He was baptised. At that time a voice came from heaven, saying, “You are my beloved Son: in You I am well pleased” (Lk 3:23). Second, during His ministry, when He was on the mount with some disciples and He was transfigured before them. There they saw Jesus speak with Moses and Elijah and a voice came out of the cloud saying, “This is my beloved Son. Hear Him” (Lk 3:35). Third, near the end of His ministry, after Jesus had said, “Father, glorify Your name” a voice came from heaven saying, “I have both glorified it and will glorify it again” (Jn 12:28).

Each time the voice came from heaven in response to Jesus’ prayer. The first time a voice came from heaven it was a sign legitimising Jesus’ claim as the Messiah. The second time, when Jesus metamorphosed into a shining figure on the mount, the ‘voice’ from heaven showed the disciples that God was well pleased with Him and that they should listen to Him. The third time God’s voice sounded from heaven was soon before Jesus was to be crucified, when some Greeks had asked His disciples whether they could speak to Jesus.

These Greeks wanted to interview the famous prophet of the land of the Jews. That wouldn’t have surprised the disciples. There was a close connection between Jews and Greeks. Indeed, in those days Israel was awash with Hellenists, Jews who had adopted the Greek culture. One Jew named Philo, who lived in Greece, wrote many books and tried to synthesise or bridge the distinction between Jews and Greeks. He did all he could for the ‘UNESCO’ of that era: the international unity of ‘religion’ and ‘culture’ and history.

Anyway, a few Greeks come to Jerusalem because they’re interested in Jesus and His position in the Jewish religion. They’re keen to get to know Him because they’ve heard that He draws crowds like a magnet. What is He? A prophet? Philosopher? Politician? Social guru – from Nazareth? They want to interview Him to find out. For Greeks, as you know, “seek wisdom” (1 Cor. 1:22) and they like to look up to certain people. The typical Greek ideal is the perfect man, a heroic figure, unbroken, upright, confident. And so they ask the disciples for an interview with Jesus.

Well, how’d the interview go? Lots of ‘photos’ (to use today’s language)? What did they discuss? What were the questions and answers? How long did it take? We get no answer to such questions; nothing about an interview. We don’t even know if it took place.

When two of the disciples ask Jesus, He seems not to give a direct answer.  And yet, the Saviour does respond. He acknowledges, as it were, that the question about ecumenical contact affects Him (and us). And the subject of his reply is not to show that He is the heroic figure so admired by the Greeks; not the lotus flower in all its glory, but He speaks instead about a dead seed, about a seed not producing much grain unless it first dies and goes into the ground.

He knows Himself to be that Seed about to enter the dark night of curse and death and of being forsaken. And the fact that this is so, troubles His soul. Yet He knows that this is the way for His Father to be glorified, and that the time for this has arrived. Oh, the immediate future is so dark. Hellish suffering and death are so near. His soul is so terribly troubled. He is fully conscious of the significance of what is about to happen and it weighs Him down. He says to the two disciples: “Now My soul is troubled, and what shall I say? ‘Father, save Me from this hour’?” What shall I pray now that the terrible suffering is about to begin in earnest? What shall I choose at this critical moment: life or death? My existence or the glory of Father’s name? There is no doubt of His choice: “But for this purpose I came to this hour. Father glorify Your name.”

And immediately a voice responds from heaven: “I have both glorified it and will glorify it again.” This third voice from heaven, near the end of Christ’s ministry on earth, says as it were: Amen; so it shall be. God echoes: that’s how it is – no Greek ideal young man arrayed in the beauty and glory of his strength, no Apollonian ideal representing the perfection of youthful manhood, but a crucified “man of sorrows” who must, like a seed, die and be buried in the ground. In your curse-death, says God, I shall glorify that Name.

That voice from heaven, says Jesus, sounded not for His sake but for the sake of the people around him: the Jews, the Greeks, and His disciples.

For your sake, Jews. Your Messiah is entering His suffering, and you can’t complain that God has not spoken to you in your own language. You have your scribes and they know how Abraham, Samuel, Solomon and so many others who in the OT were spoken to directly by God. And you have bestowed honour on such men. Why then, oh Jews, do you bestow honour, even today, on such men on the grounds that the Father has spoken to them directly, and yet refuse to honour Jesus the Nazarene to whom God spoke directly? Why do you withhold from Him the honour you bestow on others?

The reason? He’s not their type of Saviour! They don’t want a Messiah from a carpenter’s shop, a David whose flesh is to be eaten, a son of man whose bread is to be chewed, a Shining Morning-star who like seed has to be buried in the ground. Such a messiah is an ‘offense’ to them (1 Cor. 2) and therefore they will not heed that voice. Despite all the signs and miracles and voices they refuse to say: He is the One! Indeed, they immediately question the voice. What was it? Maybe it was thunder? Or an angel?…

That voice was also for the Greeks who sought to see Jesus. They could go home to Greece and report that in the land of Israel they heard a voice from heaven answering the prayer of Jesus called the Christ. They could report that this Christ didn’t fit the picture of the noble Greek ideal but like a criminal would die on the cursed cross and then, like a seed, would be buried in the ground in order to bear fruit. Yes, they’d heard the voice from heaven and they were faced with a choice. They could embrace this Christ, whom God so wondrously answered from heaven, as the sacrificial atonement for all who believe, or they could continue to cry that such a gospel was foolishness (1 Cor. 2).

Indeed, that voice was there for everyone. Will you accept it or will you reject it? Will you choose Him or lose Him? Will you believe or choose unbelief? Will you embrace salvation, or condemnation? Heaven, or hell?

How many Greeks and Jews have not lost Him because, despite these words from heaven, and despite the many miracles Jesus did, and despite the proof He continually showed from OT scripture that He was the fulfilment of the promises and ceremonies that pointed to Him, they refused to believe? Why? Because they could not accept a suffering Messiah who had to die in order to pay for their sins.

Yet the voice of the Father is the voice of love, a love so great that He, the righteous, holy Judge of all the earth, for whom justice therefore must be done, did not spare His own well-beloved Son but gave Him up as a sacrifice for all who trust in Him alone. That voice of salvation, of atonement through the only acceptable sacrifice—that of His own perfect Son—continues to be proclaimed in His churches and through His Word.

The above is loosely based on parts of chapter 20 “Derde Parool” of Dr K Schilder’s book Licht in de Rook, Naamloze Vennootschap W. D. Meinema, Delft, 1951. 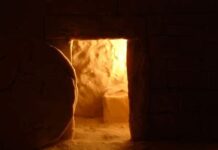