All history is the story of the antithesis. It started in paradise and will end when the Lord Jesus returns. Only God knows when that will be, but the Lord Jesus teaches us to be alert to the signs of the times (Mt 24). So let’s note one clear sign: it cannot escape us today that western countries—such as Europe, Britain, North America, Australia—which once considered themselves unashamedly Christian have become increasingly godless and normless, and that it’s becoming more difficult to do mission and spread the gospel. And the apostle John warns that this normlessness will affect and infect the church, the seed of the covenant. Therefore it must battle to uphold the truth. With an allusion to Revelation 11:2 Holwerda once said, the degeneration starts with anomie and ends with sodomy. When we see that occurring so widespread it foreshadows the end of time with its accompanying hatred and persecution of God’s people, but also the wonderful coming of the Lord, the ultimate glorious victory of the antithesis.[i]

Why would the world do that? To answer that you need to consider what it is that characterises the world. Rev Vermeulen says the world leads lives characterised by their gods and desires. That is, they are driven by love for earthly things: pleasure, success, pride, lusts and own desires. They don’t want to serve God and submit to Him in every part of life but want to live a life apart from God and the renewing work of Christ. And because Christ’s people are no longer slaves of sin and Satan but restored to serving God in everything, the world is hostile to God’s people. That hostility is particularly evident in places like China and North Korea, in ISIS’s brutality against Christians, but also in western hostility against the church and the Bible. Their oppressive attacks aim to eliminate the people of God.

Satan doesn’t only use the open hostility of the world; he also uses the world’s temptations to lure God’s people away from God and obedient service. He tempts God’s people, adds Rev Vermeulen, to serve their gods: “Come along to our parties, our socials, where the alcohol flows, where the music rocks, where the lusts are tempted by dress and attitude, where people live it up and have a ‘good time’! Or, join us in serving the gods of success, of wealth. Fit in. Keep your head up high and be successful.” And of course, worldly advertising also promotes this kind of thinking: this, it says, is what success looks like.

Since Christ’s church lives in the midst of hostilities and the world tries to drag us away from the service of the Lord, we need to acknowledge this gospel of the gracious antithesis. We need to remember, says Rev Vermeulen, that the seed of the woman is characterised by faith in this promise. We need to remember that we’re a people set apart as we interact with the world. As we show kindness to others, as we do good to all men, keep in mind the devil’s aim to obliterate that antithesis. Never be ashamed that you have been set apart, that you been made part of the seed of the woman; it’s your greatest blessing, your salvation that God took you away from the side of the devil, from that anti-God alliance and set you on the path of the ultimate glorious victory obtained for us through our Saviour Jesus Christ.

Nor be deceived into thinking that the unbelieving world is neutral, because then you won’t be on guard against the attacks of the world. For to ignore the antithesis is to ignore Christ’s instruction to pray the sixth petition, of which we confess with the catechism: “Moreover the world the devil and our own flesh do not cease to attack us, will you therefore deliver us.”

The antithesis is gospel and involves separation from what is worldly

We are to confess this gracious antithesis and to live by this gospel, to fight the devil and the world in this struggle. And that means resisting the temptations that come your way. For remember, says Rev Vermeulen, that those temptations are always in one way or another trying to bring you away from obeying and serving Christ in every part of life – in your music and entertainment, in your marriage, in your sexuality, in your family life, in your studies, in your wealth. The temptations will always be trying to draw you away from serving God in everything.

Every part of our life is to be for the Lord, in submission to Him. That is why we were separated from the side of the devil. And to do that we need to diligently study the Word of God, working out how do we serve the Lord Jesus Christ in everything, not just on Sundays but throughout the rest of the week. It will lead us to see more and more the antithesis that God put there between those who are living for Him in all things and those who don’t, and we can strive for that obedience and holiness confident that we’ve been given the Spirit from the Seed of the woman to equip us and to resist the temptations that come our way.

The present times of restriction have prevented us from going to many of the places we might otherwise have attended. And perhaps, says Rev Vermeulen, many of those places involved things we shouldn’t have been involved in in the first place. So, as the restrictions are being lifted, let’s ask ourselves: was my earlier involvement in this or that reflecting the antithesis in my life: that distinction between those who faithfully serve God and those who just care about serving the desires of this life?

As for the relationships we strike up, remember that relationships with those who don’t faithfully serve the Lord blurs the antithesis. We are a holy people, set apart for the Lord, so that also through marrying and having children we might build the kingdom of God. Also herein the maxim applies: Let him who thinks he stands take heed lest he fall.

One of the strategies of the devil today—and it appears to be hugely successful—is to use popular culture with its music and movies in order to promote worldly attitudes. He would use the advertising and the worldly thinking to soften us up, to change us so that we become more and more conformed to the world. We see how it affects and infects the seed of the woman. We see it in the music at our parties, the things that happen there, the use of alcohol or the putting on of revealing clothing. Thereby worldly attitudes become more and more prevalent, like the devil is doing a bombing campaign before the troops get sent in, so that we don’t feel so different from the world anymore. And then it’s easier to go along with them, to start relationships with them because then we are like them. In this way the antithesis is blurred.

Rev Vermeulen asks: Do you feel out of place when people of the world are partying? Do feel like you don’t belong there? If you don’t feel that, why not? Is it because you have forgotten the antithesis? But you are allied with the Seed of the woman. You have spiritual life in Him! Live by faith in Him. Be transformed, Paul says in Romans 12, by the renewing of your mind: not being conformed but being transformed. This is our calling. And God may use us to attract thereby the elect who are still part of the world today.

So how does Christ’s victory over the devil progress? How is the ruler of this age cast out more and more? When sinners, unbelievers, are converted to Him. It makes one think of the apostle Paul calling the people of God to holy living: “That you may become blameless and harmless, children of God who are without fault in the midst of a crooked and perverse generation among whom you shine as lights in the world” (Phil 2:15). To live in obedience to Christ is to live in victory over Satan.

Be lights by being blameless in the midst of a crooked and perverse generation. As the Lord Jesus said: “Let your light shine before men so that they may see your good works and give glory to your Father in heaven.” It’s only when we live as a distinct people that we will lead our neighbour to Christ, says Rev Vermeulen. We function as lights when it’s clear that every part of our life: our dress, our music, our entertainment, our values, our attitudes are governed by, and are in submission to, the God who created all things for his glory. When we live like that, then those around us will see the difference it makes to be a child of the Lord. But if we live like the world, we will confuse those who remain in the world.

Let us show true kindness to those living around us by living for God in everything. And let’s do that with confidence, for He will gather in his own. He is the victorious One whose coming we look forward to with ardent expectation. Indeed, we look forward to his complete victory, to the moment when He will have gathered in all his own, when He is victorious and brings to everlasting judgement all those who have hated Him and opposed Him and rejected Him and turned their backs on his promises. And we will rejoice in his final victory over the serpent. That’s a promise! For we read: “And the God of peace [the God of peace!] will crush Satan under your feet shortly” (Romans 16:20).

[ii] This is the last in a series of three articles, each based on one of the three points of the sermon of Rev Carl Vermeulen which can be viewed on https://www.youtube.com/watch?v=izrW_ge_T0o&feature=youtu.be 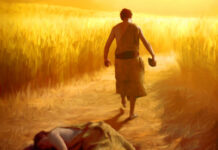