What actually is ratifying? Literally, it means ‘to empower’ or ‘to make valid’. By ratification we mean that a separate decision confirms other decisions; it gives them legal force.

Important European decisions, such as admitting a ‘new’ country into the EEC, must be ratified by all Member States separately. Peace treaties between two countries, drafted by negotiators, must be ratified by the peoples’ representations of both nations. Otherwise the decision, the peace agreement, has no legal force. That is how it works in Western democracies. And in the Church? Is it just like that?

It’s good to have a look at that. Does a synod decision only have legal force in a church if the church council has ratified the decision? If so, would that not be contrary to article 31 of the Church Order? And wouldn’t we then be acting democratically like the world? Or maybe even independently? What then would be the value of the bond of churches?

Ratifying Acts of Synod is not something that we have agreed to in the Church Order. There is not even a known synod decision wherein it was decided. In the history of the Reformed churches there have always been differing views about it. Some have found ratification to be contrary to church law and Church Order. After all, they say, we have article 31, and therefore ratifying synod decisions is no longer necessary. Others point to the position of the local church. That is emphasised by the ratification of decisions of major assemblies. And that was considered to be a good thing.

It has never been an issue to fight about. Sometimes use was made of it by a classis or a regional synod. Sometimes for years no use was made of it. For a long time, it played no role in the Reformed Churches prior to the Liberation of 1944 nor for many years in the Liberated churches after that. Church councils took knowledge of synod decisions and placed the Acts in the archives. In fact, it is only since the 1970s that the practice of ratifying synod decisions became more common; perhaps as a result of the church struggle in the 1960s.

In any case, it’s not obligatory. For the churches are already committed. They have bound themselves through Article 31 of the Church Order. And through Article 81 (of the FRCA C.O.). Therein is shown (and there are many synod statements about this) how churches and church members are to deal with decisions of major (or ‘broader’) assemblies. Therein we agree that the decision of a major assembly will be accepted as binding. Unless it is contrary to God’s Word or the Church Order itself. But then it must of course be pointed out. If churches do not want to ratify, they can just take note of the Acts. After all, the decisions have a binding character.

However, it is customary and highly recommended actively to ratify the Acts. To review the matters and to make a separate decision that the Church Council acknowledges that the Acts are not contrary to God’s Word and the Church Order and are thus binding on the congregation.

What changes then? It is not that synod decisions only then have legal standing. They have that the moment they are published.

What, then, is the purpose of all that reading by the church councils?

It is certainly not the aim to repeat, however superficially, synod’s work. In fact, that would be an impossibility. When it comes to matters that don’t affect all the churches, judging is often not possible.

Sometimes people, also church members, think that the decisions of classis and synod have no legal status until they are accepted by the local church councils. But that is a misconception; decisions are valid from the moment the Acts are published. After all, have we not taken all these decisions together? Such thinking would be a bit revolutionary, in the spirit of ‘rule by the people’ applying also in the church—and would reflect independentism (the notion that the local Church Council, when it does not suit it, goes its own way). In doing so, it would ignore the fact that the bond of churches is based on an agreement whereby the churches in the bond cooperate with one another and have mutual commitments and obligations based on God’s Word and the confession.

The whole idea is not to peruse the Acts meticulously to see if a mistake might be lurking somewhere. Nor is the aim to check whether the views of one’s own Church Council or a classis has been adequately honoured. Nor whether the Church Council agrees with all the considerations and grounds linked to the decisions. Nor whether the discussions have been conducted to our liking. Frequently a church council would rather have seen a different decision at some point. But decisions are made based on a majority vote following discussion and debate. Otherwise, no decisions could be taken at all.

Ratifying the Acts in a reformed way then has everything to do with our attitude. It should not be one of suspiciously checking up. For that would attest to distrust in our major assemblies. Our bond of churches is not a relationship based on distrust but of knowing each other to be bound by God’s Word and of submitting to His guidance. That is also always our common prayer. And where that occurs it gives much confidence. And where it doesn’t, there’s something seriously wrong.

We should therefore be ratifying with an attitude of trust. The church council’s work is not one of inspection, but of being grateful recipients of the Acts. Such an attitude is according to Scripture.

We can now also see that ratifying the Acts in the churches is quite different to ratifying decisions in politics. In the churches it’s not a democratic process. Ratifying the Acts means that the churches take note of the Acts, and that’s more than just glancing at the cover. It involves seriously considering what has been decided at a synod by the churches. Church councils can’t build on reports in the church media. Not that the reporting would be unreliable, but the nature of a media report is that it provides summaries and impressions of what happened, whereas as churches we must take note of the full decisions in their context.

The churches can also consider which decisions need to be followed up by the local congregation. And then the Church Council notes with thanks, first to the Lord, and to the Synod delegates, that the Acts do not contain matters that are contrary to God’s Word or the Church Order, and that the Acts are valid for the churches. Ratification can mean ‘empowering’. Not in the sense that it’s only valid now, but in the sense of ‘recognising the validity of the Acts’; in the sense of concluding that, indeed, all’s fine; and that we too will abide by these Acts in church life. It’s saying as it were: so be it.

Is there then no question of scrutiny at all? Yes, that’s there. Also when the Acts are reviewed the Biblical calling is there to investigate and test everything. If, when studying the Acts, we notice matters that appear to be contrary to Scriptures or to the Church Order, then that is certainly reason to look at the matter more closely. And when a decision really is contrary to the Bible, the Church Council has the obligation to raise the matter at the next synod.

This obligation to test decisions always remains. But testing should not be the first purpose of ratification.

You might ask yourself whether ratification is meaningful. Yet it is. What it does, as some theologians have said in the past, is emphasise the fact that the local church is an autonomous church of Christ. She is ultimately responsible to her Lord Jesus Christ. A synod is not above a church council. There is to be absolutely no hierarchy; no institution is to rule over the churches. No, a synod is a broader assembly, a meeting of all churches together. And all those churches are equal.

That is why ratification certainly makes sense. It stresses, it underlines, the fact that autonomous churches have made decisions together. The decisions of the bond of churches are our decisions. Even though we are not always happy with them, and even though they sometimes go against our feelings, they are our decisions. It’s important to remember this when we live in a time dominated by the spirit of revolution, a spirit that doesn’t always bypass us.

T L Bruinius is a member of the DGK (De Gereformeerde Kerken in Nederland). This is a translation of his article “Bekrachtigen” which appeared in De Bazuin, Vol. 7 No. 14, 10 April 2013. 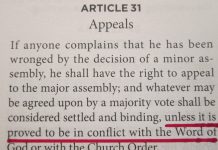