Past synods of the Free Reformed Churches of Australia (FRCA) have rightly expressed concern about the proliferation of hymns in the Reformed Churches of the Netherlands (RCN) when they were still our sister churches. However, we are ourselves slowly but surely increasing the number of hymns for the church services. The Canadian Reformed Churches produced a new Book of Praise in 2014 with 85 hymns. That may seem a relatively small number when compared with the RCN, but it’s a huge number when compared with what our forefathers decided and there are moves in our Canadian sister churches aimed at increasing the number exponentially. Why did our forefathers limit the number of hymns and why should we? Let’s consider the developments.

Some people justify the singing of hymns because texts such as Ephesians 5:19 and Colossians 3:16 speak of singing psalms, hymns and spiritual songs. However, as Rev M Janssens points out, these are all words for three types of Scripture’s Psalms. The ‘hymns’ refer to thanksgiving psalms wherein joyful gratitude is expressed for God’s gifts of grace. The term ‘spiritual songs’ refers to the fact that the psalms are governed by the Holy Spirit and hence are in accordance with the Word of God. We also read that when the Lord’s Supper was instituted Christ and His disciples sang a hymn. However, a more literal translation is that ‘they sang praise’. Janssens says we must be extremely careful to ensure that the songs we sing are based directly on God’s Word.[i]

The claim that the psalms are Old Testament (OT) songs while the hymns focus on the New Testament (NT) redeeming work of Christ in effect drives a wedge into the one Word of God. When we read of Christ speaking to the Emmaus travellers after His resurrection, we read: “And beginning at Moses and all the Prophets, He expounded to them in all the Scriptures the things concerning Himself” (Lk 24:27). The words “in all the Scriptures” indicates that the whole OT, including the Psalms, also speaks of Christ. Indeed, the Psalms are specifically mentioned by the Lord when He appeared to the disciples and said: “These are the words that I spoke to you while I was still with you, that all things must be fulfilled which were written in the Law of Moses and the Prophets and the Psalms concerning Me” (Lk 24:44).

The famous Synod of Dort 1618-1619 stipulated in art. 69 of the Church Order: “In the churches only the 150 Psalms of David, the Ten Commandments, the Lord’s Prayer, the Twelve Articles of Faith, the Songs of Mary, Zacharias, and Simeon, the Morning and Evening Hymns, and the Hymn of Prayer before the sermon shall be sung; the hymn ‘O God who is our Father’ is left in the freedom of the churches to use or not. All other hymns are to be withstood by the churches, and any that have already slipped into the churches are to be resolutely removed.”[ii] For centuries the church therefore sang the 150 psalms and 7 hymns. A morning and evening song were added by the printers giving a total of 9 hymns.

It was not until the RCN Synod Arnhem (1930) that it was decided: “to expand the present number of hymns with a few rhymed and unrhymed Scripture passages or songs which are most closely matched to Holy Scripture to be made available to the churches to be used specifically on feast days, on the days devoted to the remembrance of the passion and death of Christ, at the administration of the sacraments, the ordination of office bearers and the confirmation of marriage”. The RCN synod Middelburg (1933) re-emphasised: “That for the regular church services the psalms are sufficient. These provide in an incomparable way what takes place in the soul of those who fear the Lord”.[iii] A pre-WW2 Bible and song book I’ve inherited from that period shows just 12 hymns.

We know that later RCN synods discarded this emphasis on restricting the songs sung in the church services and homes as much as possible to the psalms. Towards the end of the 20th century there was such an increase of various hymns that the FRCA wrote to the RCN, “To express concerns about the continuing proliferation and the contents of the hymns from the ‘liedboek voor de kerken’, and to continue to recommend that more time be spent on the Psalms and on songs based directly on Scripture.”[iv]

Our own FRCA history

FRCA Synod 1968 (Art. 46:3a) expressed the warning that: “it must especially be guarded against that the Book of Songs should in the least achieve the character of a ‘hymn-book’”. That warning was reiterated by Synod 1970. It even asked the “Canadian deputies to send them the ‘hymn-section’ on approval before definite publication will take place.” The request appears to have fallen on deaf ears.

By 1971 the Canadian Reformed Churches (CanRC) had published a new Book of Praise with 62 hymns. Our Acts of Synod 1972 recorded that: “objections are raised against the large number of hymns, and the fact that this ‘proof booklet’ is published as a definite book for Canada; and the Australian Churches are being forced into a situation.” Synod decided “to advise the Churches regarding the use of the hymn section of the Book of Praise – to limit themselves to the hymns named under 6 and to regard these also as a proof collection” (Art 46). Subsequent synods reflect the FRCA’s cautious approach about using the hymns in the Book of Praise. Slowly but surely more became ‘acceptable’. By 1985 we had adopted 34 hymns. Meanwhile Canada published a new Book of Praise with 65 hymns.

Our 1985 Synod (Art 59) rejected a proposal to adopt all the hymns in the Canadian Book of Praise on the ground that to do so “is consistent with the principle established by earlier Synods to keep the number of Hymns to be used in our Churches to a minimum. See also Acts 1966, Article 46(d)”. However, in 1987 (Art 99) the tiller swung the other way and, as a result of the appeal and request of a minister, all the hymns were adopted (first on probation, later confirmed at a synod).

In 2014 a new Book of Praise was published by Canada. Our Synod 2018 decided to produce an Australian version of it, including the additional hymns. The total hymns now 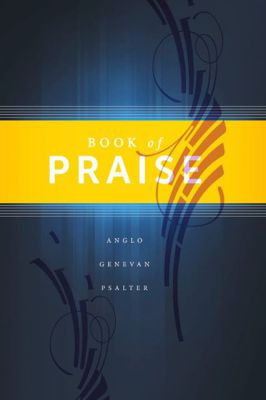 number 85. It is evident that the principle held by the Synod of Dort and maintained by our forebears for centuries is being discarded.

In the CanRC there are now moves afoot to use, beside the Book of Praise, the Trinity Psalter Hymnal—a joint publication of the Orthodox Presbyterian Church (OPC) and the United Reformed Churches in North America (URCNA). It contains 428 hymns and 278 Psalter selections. Last November the CanRC Regional Synod West (RSW) decided to recommend “that, in addition to the adopted Book of Praise, General Synod Edmonton 2019 approve the Psalms and Hymns of the Trinity Psalter Hymnal (TPH) for use in public worship”. RSW had received a number of overtures which “demonstrate a commonality in speaking about the Trinity Psalter-Hymnal (TPH) and its merits in addition to the Book of Praise (BoP)”. RSW added: “The purpose is not to replace the BoP but to enhance the unity in worship between us as sister churches in North America by allowing the churches to also sing from the TPH”.[v] If Synod Edmonton adopts the recommendation, the number of hymns in the CanRC will have increased exponentially.

Of course, Synod Edmonton hasn’t been convened yet. And the CanRC may well decide not to adopt the TPH, at least, for the present. But you can see that there are attempts to head in the direction of an even greater proliferation of hymns.

Are we wiser than our forebears through the centuries who were so determined to limit the number of hymns for use in the churches? And those hymns were mainly Scripture passages put to music. These days people are quick to dismiss the slippery slope argument and say that we should not be governed by fear, but Church History has taught us that in the past the addition of hymns eventually led to a proliferation of additional hymns and that this was very much a symptom of Church degeneration. What happened was that the songs made by man, often with more appealing tunes and more familiar to Christians from ‘outside’, displaced the words of God expressed in the Psalms. Every hymn sung in a church service is at the cost of a Psalm not sung. New hymns are introduced without evidence that the previous hymns were somehow inadequate and without Scriptural grounds for incorporating more hymns into the churches.