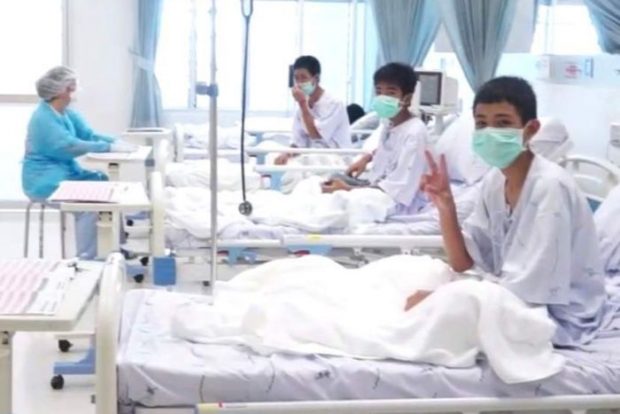 Christians know themselves called to “do good to all, and especially to those who are of the household of faith” (Gal. 6:10). Consequently, when twelve boys and their football coach are trapped in a cave, four kilometres from the cave’s entrance, we ask almighty God if it may please Him to graciously spare them and, through it, to bring glory thereby to His name. Although He did spare them there was precious little honour to Him evident.

I don’t want to minimise the tremendous effort involved in this rescue. There’s no doubt that it required specialist effort, great attention to detail to mitigate the dangers and risks, and much coordination of the great number of people involved. And the fact that it cost the life of one of the rescuers, a trained navy SEAL, highlighted the danger. We may certainly express deep appreciation for the rescue work undertaken.

But we know that “unless the Lord builds the house” … “unless the Lord watches over the city…” (Ps. 127) unless the Lord blesses the rescue operation, those who work so assiduously “labour in vain”. It was the Lord who withheld the monsoon rains, who kept alive the boys (some of whom couldn’t swim) and their coach, and who facilitated the rescue through such dangerous terrain and murky water.

But a world which by and large lives in unbelief is not going to credit the Lord with withholding the monsoonal rain and ensuring the success of the rescue. Instead of praising God, the media and respondents were lavish in their praise of humanity. The Australian’s editorial (12/7) called it “an example of humanity at its best” by “selfless volunteers”, “something from which the world can take heart in difficult times”, a venture which “highlighted the ingenuity and indomitability of the human spirit”. Prime Minister Mr Turnbull called it “one of the most inspiring rescue missions of our times”.

Likewise, ‘Letters to the Editor’ of the same newspaper spoke of the boys and their coach being a “credit to the human spirit that responds to suffering” who have “left the world a lasting legacy of transforming hope, and a joy that will withstand any amount of doubt”. The rescuers (not the Lord in His Word) “have shown us how to make the world a better place”. Another, a little more ‘religious’, said, “prayers were offered in every faith; they strengthened and supported the compassion, the courage and the competence of the rescuers”. Evidently it doesn’t matter which faith – Hindu, Muslim, Christian, you name it … they’re all different ways of reaching a ‘higher being’ who strengthens and supports the rescuers.

Despite this, God graciously spared the trapped boys and their coach, though at the cost of one of the rescuers. As one letter writer put it much better: “To admit any Christian belief these days leads to mockery from some, but when one of the most complex rescues ever undertaken works against the odds, when the monsoonal rains hold off, when you see such outstanding courage and skill from the rescue team and when 12 brave children and their coach are brought back into the light and life, one can only say thank God.”

There is a sad irony in the world’s attention to this rescue. On the one hand there was the huge commitment and dedication shown, as the world ‘held its breath’ to saving the lives of the trapped boys and coach; on the other hand, the lives of millions of unborn children are legally snuffed out (through abortions) and increasingly people are permitted to end their own lives (through legalising euthanasia).

Pleasing as it is to see the boys and their coach saved, God’s Word puts our lives in the perspective of eternity, of heaven and hell. To be rescued from temporal death is one thing; to be rescued from the eternal death we deserve, and which awaits all who do not repent and believe, is reason for infinitely greater joy. May many yet come to this joy through faith in the conviction that Christ, through His supreme sacrifice for us and all who believe, obtained for us true life now and forever. May many, with us, rejoice in this salvation and, renewed by His Spirit and Word, praise Him now and forever.

Media bias and the axe-wielding attacker

‘Safe Schools’ program anything but safe