Luther appealed for schooling for all children – boys and girls. How modern for his time! He sought this because he was convinced that schools could help with the aim of raising children. They could do that by giving students religious instruction and teaching such cultural skills as reading, writing and arithmetic. Luther believed that, based on the child’s baptism, it is necessary for all baptised children to receive education. 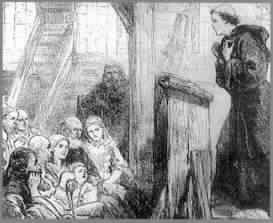 Luther saw this education as a natural consequence of the child as being a child of the covenant. Such a child needed to learn to read to have access to God’s Word. Hence children needed to learn to master the mother tongue and, in addition to the above-mentioned skills, learn subjects such as history and music. These, said Luther, should be taught in a way that is pleasurable for the child and if possible through the child’s disposition to play.

Indeed, the problem of motivating children had Luther’s attention. He said, “Children like to skip and jump around and play to their heart’s content. You can’t stop this, nor would it be good to oppose and forbid it. Since God graciously made children this way, why not establish schools whereby language and other subjects, including history, are taught through the way they play.”

Luther also made short work of those who argued that the boys were needed at home to help with the work: “My aim is to let the boys attend school an hour or two per day so that the rest of the day they can work at home and there learn physical skills or whatever. In that way both goals are achieved while they are still young. Otherwise they will still spend ten times as much time playing with marbles, running, playing ball games and frolicking.”

Girls, too, need to attend school, said Luther, so that they can the better fulfil their calling and work. He said: “Also girls have time to spend an hour at school and still do whatever they need to do at home. Anyway, they easily use up more time with sleeping, skipping and playing.

The problem, he added, is that people don’t want to take seriously the education of the children nor to serve society with sensible, educated people. The devil would rather deal with rough blocks of wood, wanting people to be of no significance so that things will not go well for people on earth.

Not only did Luther want all children to be educated, he also had something to say about what ought to be taught. We have already mentioned the attention Luther wanted focussed on religious studies, cultural skills, history, music and the mother language. However, he also saw value in physical exercise: an important part of the reformed view of education. For one’s body should not be a hindrance but must be made and kept in good shape to allow one to fulfil one’s service to God and the neighbour.

In the above, the focus has mainly been on general education. What about higher education: the Latin school – preparing for ‘higher’ positions: minister, doctor, teacher, lawyer – and the university? There Luther appears to have gone along with what humanism (Erasmus) considered necessary for education. Yet also there, religious instruction was to function not only as a separate subject but as the leaven that permeated all the subjects. It had to be the basis of that education.

Luther never developed a structured, well organised, philosophy of education. Nor did he prepare an elaborate curriculum. Nevertheless, what he presented were the contours of an educational programme that served the education at schools right into the 17th century, and that would supersede the outdated scholastic subjects of the Middle Ages.

Luther’s ideas about nurturing and educating youth were based on God’s Word. He used the Bible to provide practical information about raising children at home and he provided the educational ‘building blocks’ for establishing schools. Moreover, he directed the governing authorities of his days to see their obligation to help achieve the aims of education so that people would live their lives in the service to God as His fellow workers. In all this Luther recognised the fact that children were children and that this should be reflected in the educational methodology. In all these points he departed from the Roman-catholic and humanistic views about educating children. Indeed, also in the matter of nurturing and educating children Luther showed himself to be a Reformer.

by R de Boer, “Opvoeding met een appel in de rechterhand” (Upbringing with an apple in the right hand), De Reformatie, 12 November 1983, pp. 119-121 (loosely translated from Dutch by J Numan).
(This is the second and final part of R de Boer’s article. The first, about bringing up children at home, was published earlier, see https://defenceofthetruth.com/en/2017/07/luther-bringing-children.)

In the Reformed School, God’s Word is to govern every subject and teacher